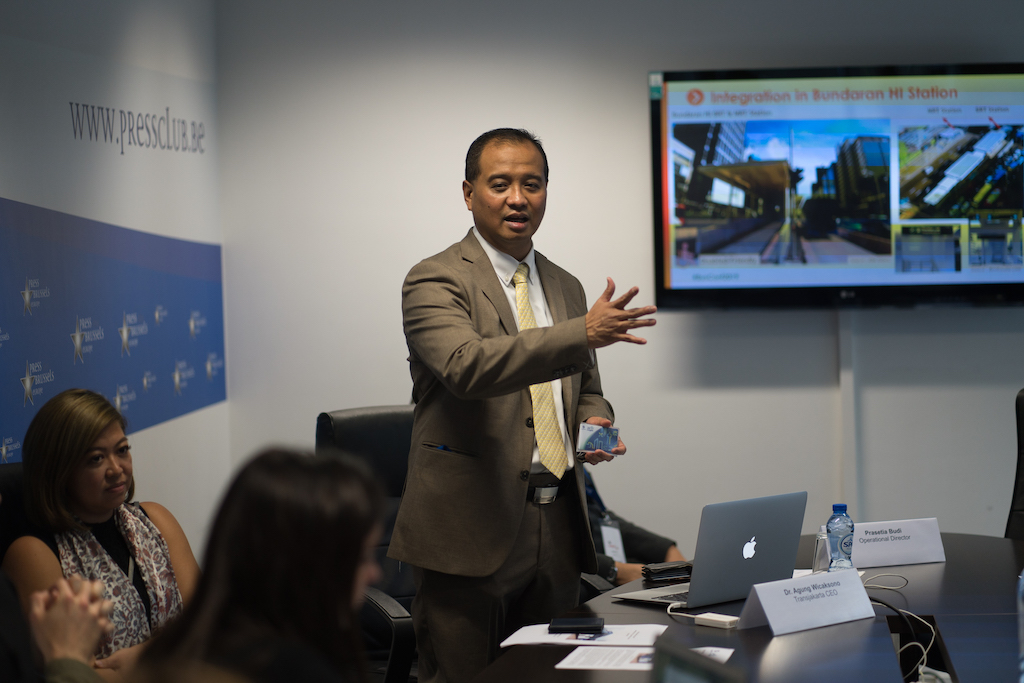 Representatives of the PT Transportation Jakarta (Transjakarta) participated at the International Bus Conference 2019 in Brussels and presented the development of public transportation services in the capital city of Indonesia, Jakarta. Transjakarta is the largest public transportation operator in Jakarta, mobilising up to 20 million passengers every day using the Bus Rapid Transit (BRT) system which is the first in Southeast and South Asia. To date, Transjakarta serves the longest route in the world of 251.2 km, throughout 260 BRT stations which are spread in 13 corridors (lanes).

This project represents a major shift from the public transportation the old ways to the modern and more integrated mobility solutions. 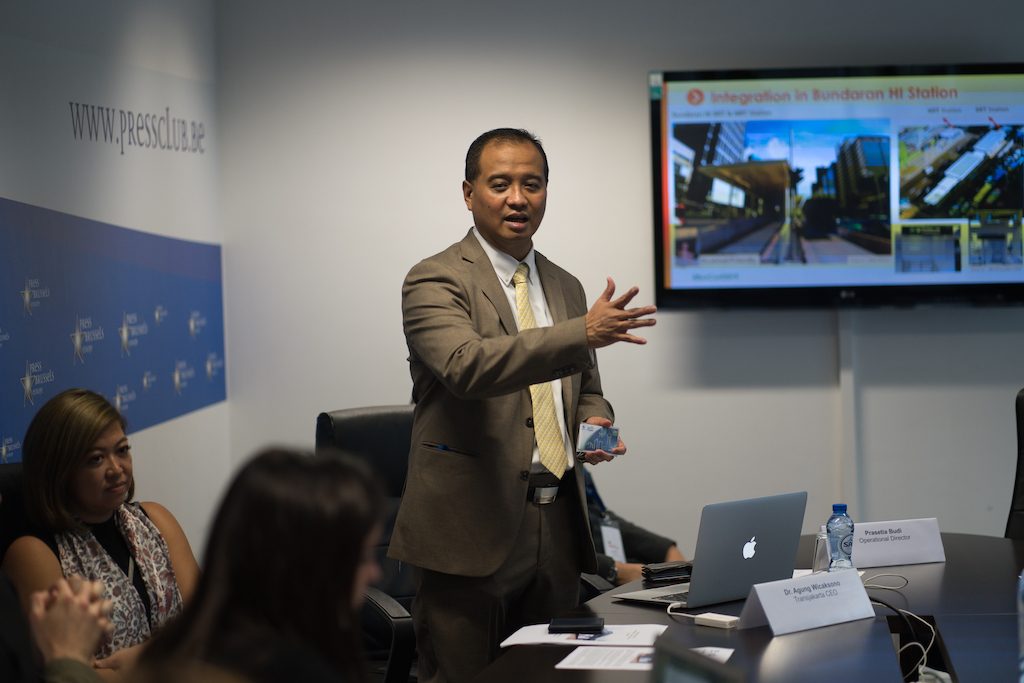 Speaking at the Press Club Brussels Europe, the CEO of Transjakarta, Dr. Agung Wicaksono S.T., M.Sc., M.B.A. explained the importance of Transjakarta in order to keep up with the need of Jakarta as a megapolitan city which must be supported by an integrated public transportation system.

“Jakarta is one of the major cities in Asia which serves the activities of 20 million people both Jakarta citizens and commuters from neighbouring cities. This number is relatively large compared to other capital cities in Asia, such as Singapore which only serves mobilization of 5 million people every day, and requires integrated multi-modal transportation services. Only by that, this mobilization can provide maximum benefits for economic development both for citizens of Jakarta and neighboring cities and at the bigger scope, the nation considering that Jakarta is the center of government and business of Indonesia”, says Dr. Wicaksono.

Transjakarta was presented at the International Bus Conference 2019, during the Busworld Europe 2019 in Brussels, Belgium. Its development is impressive and could serve as an inspiration for other mega cities across the globe.

Impoving the situation in the heavily congested city

The Central Statistics Agency (BPS) of DKI Jakarta recorded that the population of DKI Jakarta in 2019 will reach 10.6 million people, but on working days and hours the number increases along with the arrival of labors from neighboring cities such as Bekasi, Tangerang, Bogor, Depok, which can reach 20 million people. In the last five years Transjakarta has succeeded in increasing the number of users by 300%, and increasing the coverage area to 77% in five areas in Jakarta. The integrated Bus Rapid Transit (BRT) multi-modal system helps to integrate Transjakarta, MRT and LRT (operating in 2020) and gives Jakarta more space for better traffic. As reported by the TomTom Traffic Index 2018, the presence of BRT was able to reduce the congestion level in Jakarta by 8%, the biggest decline compared to other cities and put Jakarta in a better rank, from the 4th to the 7th most congested cities in the world. The Asia Development Bank (ADB) also released the ADB report 2019 Update: Fostering Growth and Inclusion in Asia’s Cities, which released a number of the most congested cities in Asia and Jakarta was only one rank below Singapore. All this data indicate that Jakarta is able to address the chronic challenges of the capital city’s transportation system.

To optimize integrated multi-modal transportation services, Transjakarta also introduces Microtrans which embraces the integration of public transport services of microbus type. Transjakarta as a system provider, route mapping, and development, is supported by cooperatives acting as fleet provider and executor. Over Jak Lingko, the Provincial Government of DKI Jakarta through PT. Jakarta Transportation collaborates with existing conventional microbus entrepreneurs and private owners. This approach is aimed to maintain the consistency of public transportation services by the government. Dr. Wicaksono notes that “this represents one of the major differences between the transportation system in Indonesia and other cities in other countries. In majority of other cities around the world public transportation is regulated by the government. In Jakarta the government embraces the participation of local community as a form of support for the regional economy development.”

Starting in 2023, BRT will use electric bus fleets which will help reducing vehicle exhaust emissions in the air and create a healthier environment.

The majority of Transjakarta buses are currently dominated by European bus brands such as Mercedes, Scania and Volvo. However, there are three units of electric buses made in China and Indonesia being tested in Jakarta. Examining the readiness of electric buses is very important for Transjakarta to be able to adjust to the tropical climate in Jakarta. This might be a challenge for European electric bus producers and representatives from Transjakarta are hoping to get some of the answers during their visit to Europe.

The company is looking for partners of European-made electric buses producers as a transition towards environmentally friendly fleet by 2024. 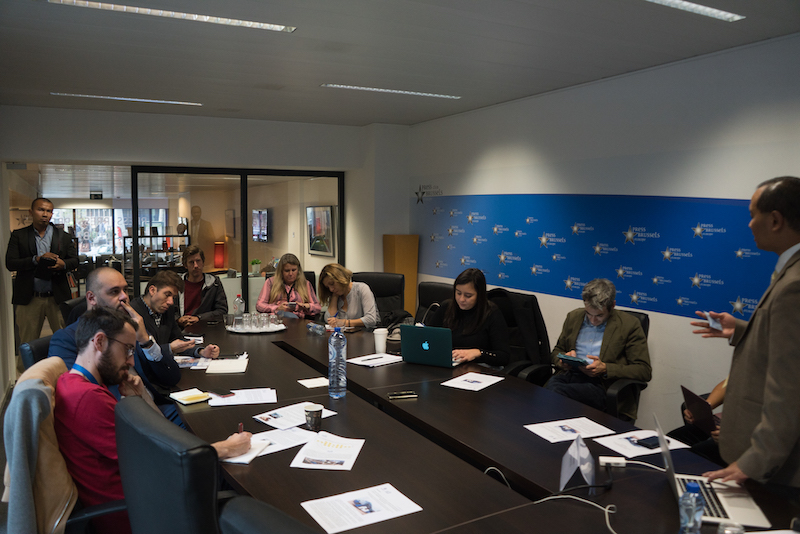 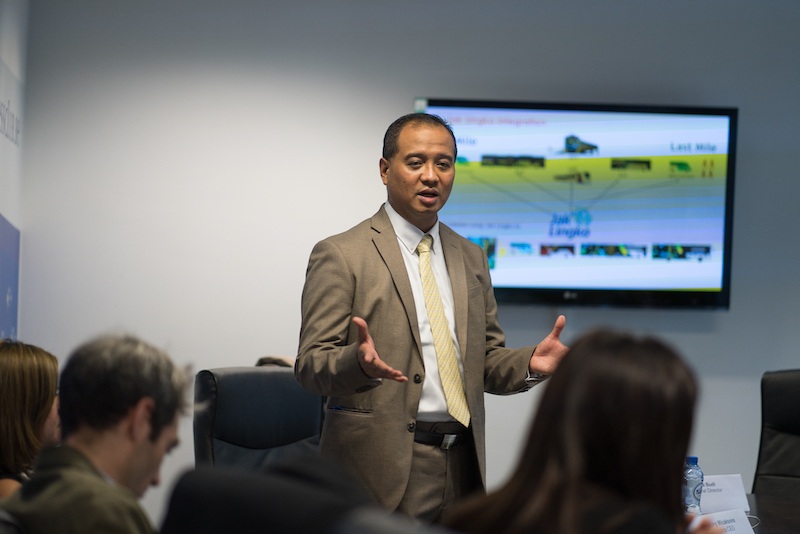 In 2019 Transjakarta owned a fleet of 3,558 bus units with 220 routes, and in 2020 is targeting additional fleet of up to 10,047 units including microbus. Within a period of 15 years, Transjakarta has succeeded changing the people behavior in Jakarta in using public transportation, which become better and more efficient. With an increasingly expanding and integrating public transportation system, supported by digital payment and information system for more friendly access to service routes, Transjakarta is providing a more integrated multi-modal transportation services to create an orderly, comfortable and safe transportation ecosystem in the capital city of Indonesia.