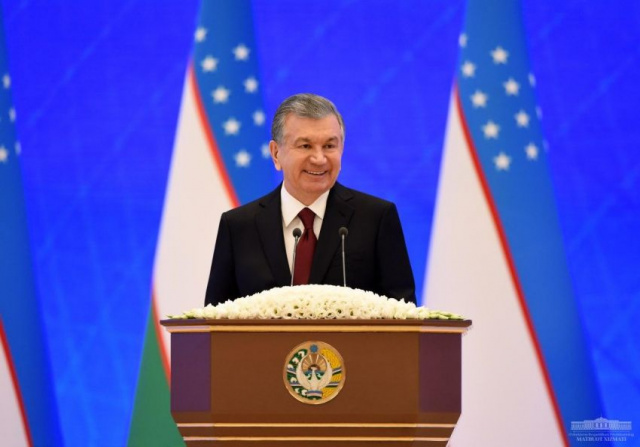 On Friday January 24th, 2020, President Shavkat Mirziyoyev stood in front of the Oliy Majlis, the Supreme Assembly of Uzbekistan, and delivered his State of the Union.

“The desire to acquire modern knowledge, to be enlightened and to have a high culture should become a vital need for all of us,” said the President in his opening statement. “We must deeply master digital knowledge and information technology, this will give us the opportunity to go along the shortest path to achieve progress.

Mr. Mirziyoyev noted that despite the fact that Uzbekistan’s position rose by eight place in the global ICT Development index, the county has a lot of areas of opportunity.

“It is no exaggeration to say that most of our ministries and agencies, enterprises are still far from the full implementation of digital technologies,” he said. “An accelerated transition to the digital economy will become our priority for the next five years.”

Democratic reform continues to be one of Mr. Mirziyoyev’s main goals. In December, 2019, elections were held under the slogan: New Uzbekistan – New Elections.

"The latest elections constituted an important political exam for Uzbekistan, and our people proved dexterous in this process,” Shavkat Mirziyoyev said while speaking at the first post-election session of the Legislative Chamber of Uzbekistan's Oliy Majlis. pic.twitter.com/nTwR9AtNSr

The President has emphasized that an increased political activity by the different parties is and remains an urgent task. For Mr. Mirziyoyev, it is necessary to continue the optimization of the three-stage system of elections to local Councils, while increasing the role of district and city commissions. “I want to appeal to all deputies and senators, and to the whole people of Uzbekistan, that democratic reforms are the only and the surest way for us,” Mr. Mirziyoyev said.

During the elections, held on the 22nd of December, 2019, more than 825 representatives of international organizations participated in the process as observers.

Mr. Mirziyoyev pointed out that over the past three years, Uzbekistan has created legal foundations and broad opportunities to ensure freedom of speech, comprehensive development of mass media and free activity of journalists and bloggers.

“We will continue to create all conditions for free and open coverage of the reforms being implemented in the country,” he said. “I am ready to support professional journalists so that they can reveal problems and shortcomings objectively.”

The President has put forward the idea of creating the Public Chamber of the Republic of Uzbekistan, whose main goal will be to strengthen the democratic power exercised by the citizens, and to establish closer interaction between the state and society. “It is necessary to establish the obligation to consult with the public in the decision-making of the most important issues of socio-economic life of the country. Such decisions will only be made with the approval of public,” he said.

Boosting education has become a pillar of Mr. Mirziyoyev’s presidency. He stressed that education reform is key to be to able to continue the country’s development. “Where there is no knowledge, there is backwardness, ignorance and wrong way. We need science, enlightenment and high spirituality,” he said.

In addition, this year more than 700 scientists and teachers will be sent abroad through El-Yurt Umidi Foundation under the Cabinet of Ministers of the Republic of Uzbekistan to conduct scientific research and improve their skills. This indicator is expected to be doubled in the future.

The President noted that in 2020, salaries of public sector employees, pensions, scholarships and allowances will increase ahead of inflation. He has forwarded a proposal to develop Small and Medium-Sized Business Project aimed at development of business entities. Open and reliable data on land plots and empty areas will be provided to entrepreneurs. From the first quarter of 2020, a modern system based on best practices will be implemented.

“I have been working on the issue of job-creation for a year and a half in 22 rural districts of Fergana region”, Mr.Mirziyoyev said. “We must implement a project to develop modern business skills among the population in all regions.”

Tourism development remains a high priority for Uzbekistan. Several important initiatives – such as the implementation of visa-free entry for more than 100 countries or to allocate 200 billion soums subsidy for the construction of modern hotels– have been created by the State Tourism Committee whose Chairman is Deputy Minister, Aziz Abdukhakimov.

Aziz Abdukhakimov: "It is envisaged to allocate about 200 billion soums subsidy for construction of modern hotels"