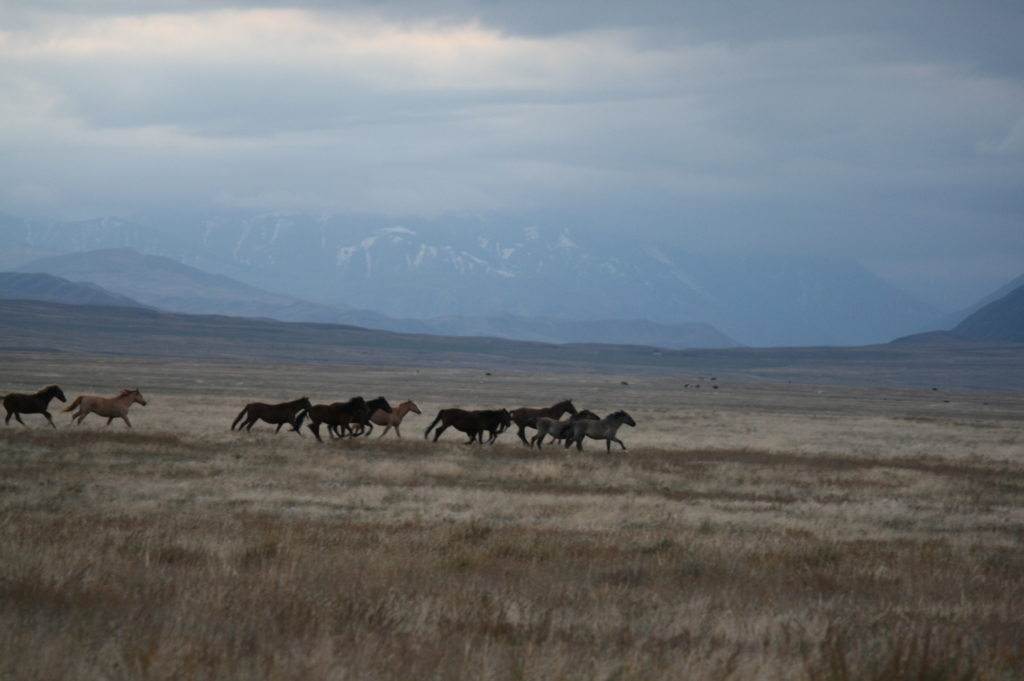 Discovering the natural beauty and nomadic traditions of Kazakhstan

Photographs: Celebration in Brussels of the 20th Anniversary of Macau’s Return to China

The cars slowed down to watch the stallion roll around in the dirt. As if sole owner of the entire Kazakh steppe, the horse kicked the air with joy, it rolled from side to side yet lifting in alert its head, which was of a darker brown than its creamy coat. In the distance the Alatau mountains lay like the entangled bodies of dormant lovers. I rolled down the window and heard the constant clatter of rubble under the weight of the cars. The camera felt shaky in my hands. Then the stallion stood up in one quick movement and galloped away as the cars drove nearer. 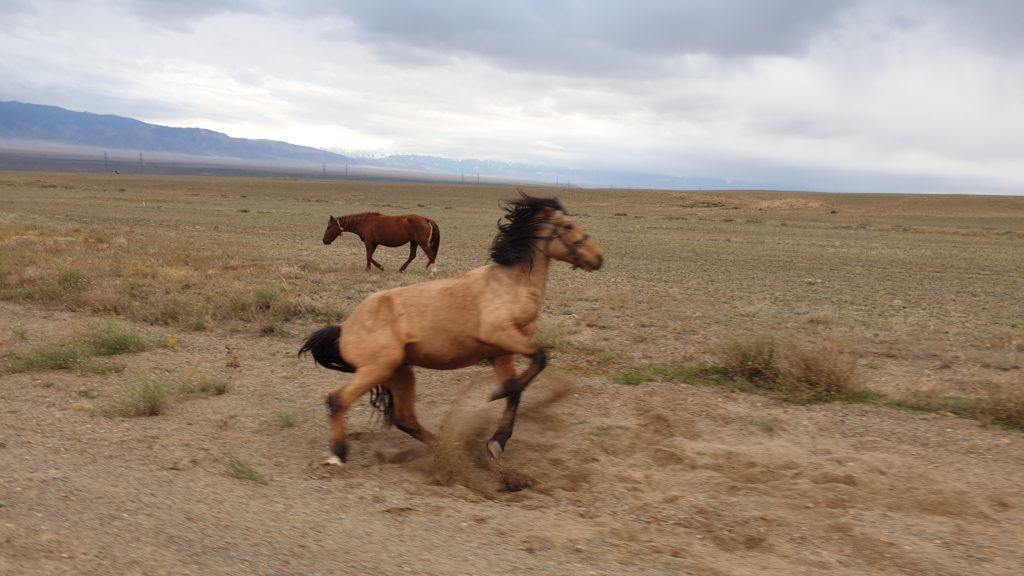 All the way to Saty, a village located south east of Almaty, strings of horses appeared left and right of the road, often scattered like insects on the backs of the hills. They grazed in peace, shook their tails and pricked their ears in alert, a spasm sometimes running across their flanks.

In the fall I traveled to the Almaty Region in Kazakhstan to explore some of its natural treasures, learn more about its nomadic ancient traditions. The horizon was clear and expansive, only the velvety plains and the ragged surface of the mountains were constant companions. I felt as if I had landed on a friendly asteroid or a verdant planet in a distant galaxy. 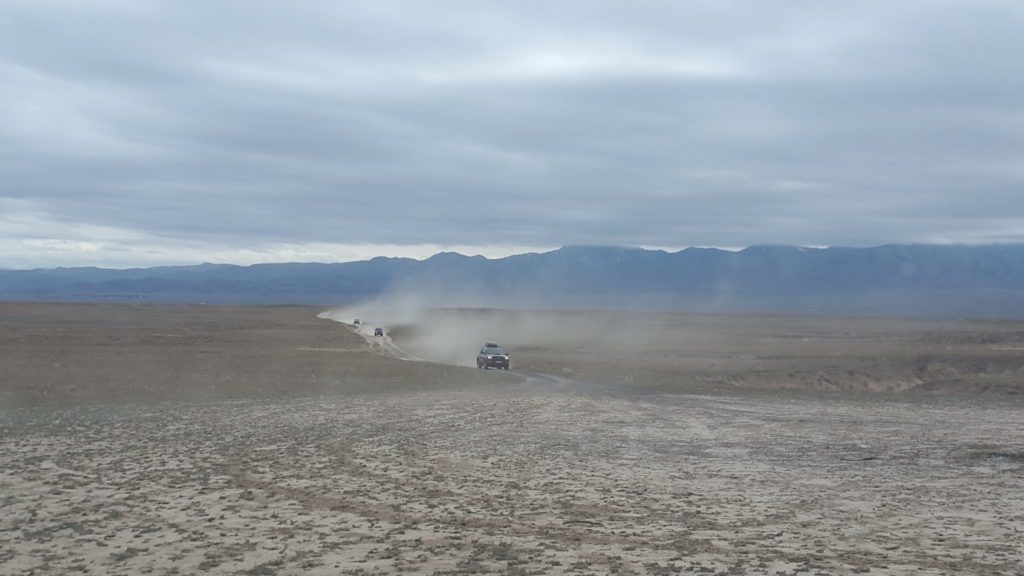 Saty is one of the first villages in Kazakhstan to adopt the model of Community Based Tourism (CBT), in which the village families join efforts with tour operators to offer food and board, entertainment, arts and crafts workshops, all of it conducted by the local community. It’s a way to get everyone involved and develop a sense of belonging and caring for their place of origin. The Kazakh government has invested in the improvement and extension of the highways and roads so that convenient access from cities such as Almaty can bring not only tourism to the region, but also goods and services. 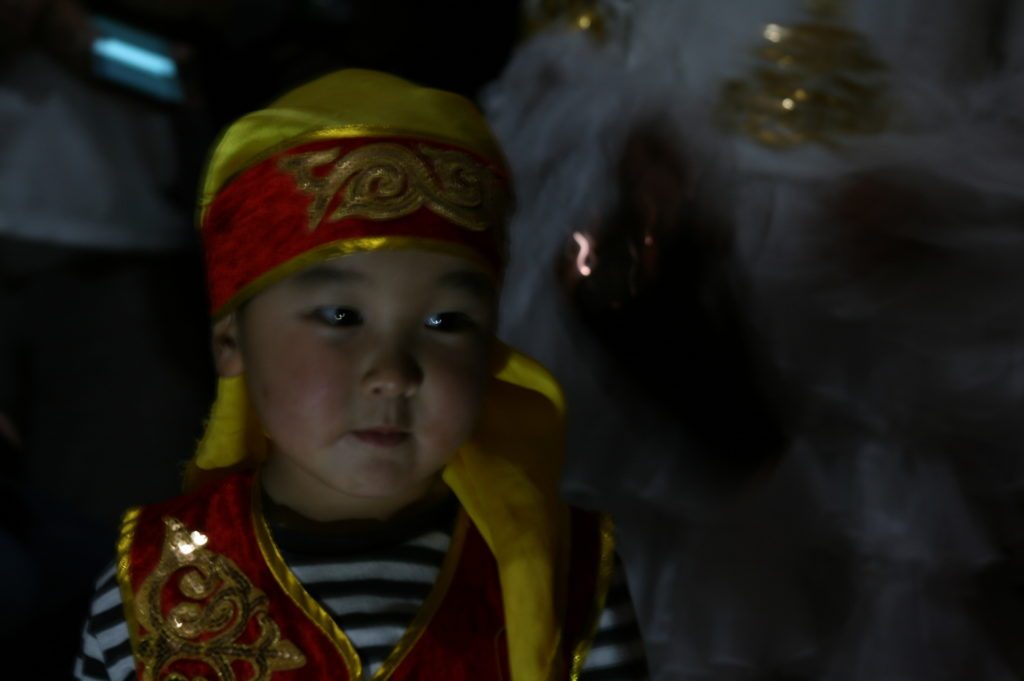 Inside a yurt, the traditional nomadic home of the Kazakh nomadic people, I enjoyed typical songs performed by a music teacher from the local school who played the dombra, a traditional string instrument, as well as a dance by young girls and boys. One thing that caught my attention about the yurt was the center of the ceiling which has a circular shape and is called Shanerak. It is, symbolically, the most important part of the dwelling and its shape means union. Union of the family but also of the nation. A family-size yurt can be disassembled in about 2 hours by people familiar with its structure, which has a weight of approximately 350 kilos. The yurt can be transported on the back of either one camel or a couple of strong horses.

It is believed that the horse was originally domesticated by the Scythians, a group of peoples living in this area of Central Asia as far back as the 11th century BC. The Scythians were so deft at horse riding that some scholars have entertained the possibility that the myth of the Centaur, created by the Greeks, found its origin in this part of the world. 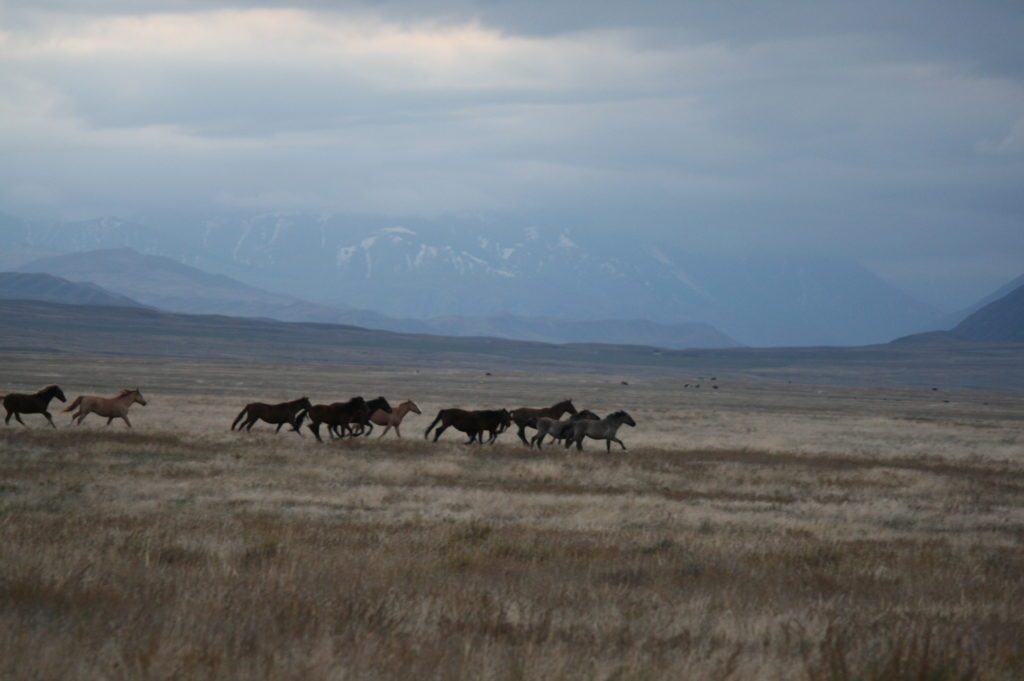 At the table I tried the manties (dumplings filled with vegetables or spiced meat), as well as tomato and cucumber salad. There was also Kurt, which is made from dried salty cheese and has a very sour taste. Several kinds of sweets we offered for dessert including irimshik and zhent which are sweets made with a mix of millet flour, curd and sugar.

After dinner, when everyone had gone to bed, I went for a walk near the compound where the cabins stood, and even if the cold air gave me a runny nose, I stopped for a moment under the moonlight and filled my lungs with the smells of the night, a blanket of peace falling over me. Only the murmur of the Chilik river could be heard.

On the voyage I encountered landscapes of sheer dramatic beauty. The turquoise waters of the Kaindy lake with its solitary trees standing like frozen sentinels draw an image I will never forget. Formed after an earthquake in 1887 which destroyed a natural-formed dam upstream, the lake holds a snapshot of nineteenth century Kazakhstan: the trunks of the trees still standing in the middle of the lake’s waters date from a time when the Russian Empire still lay claim to these lands. 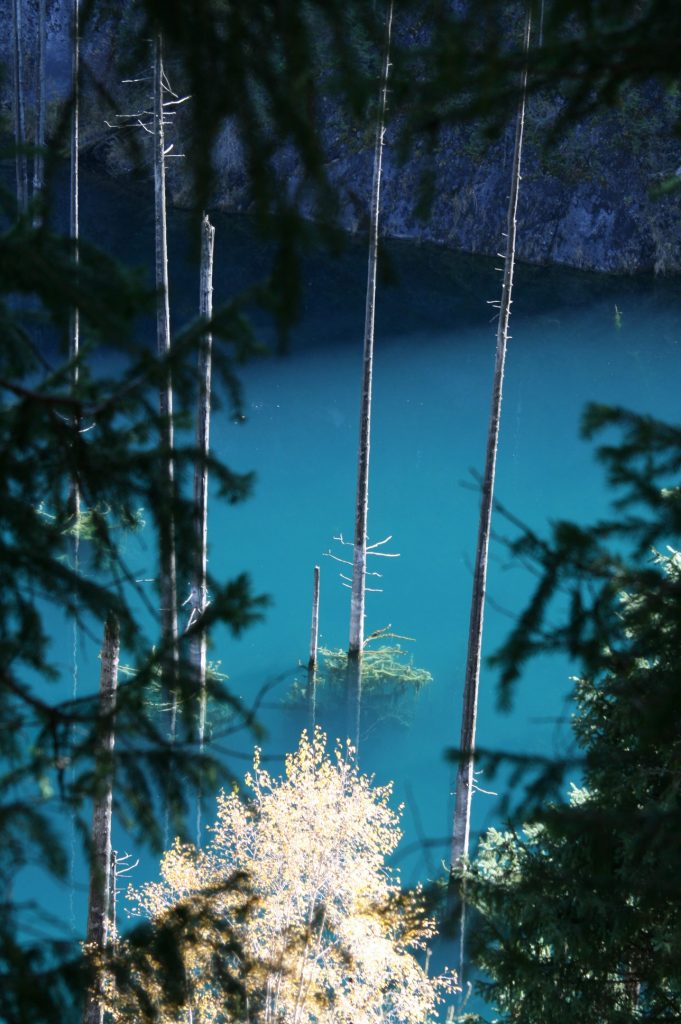 Not far from Kaindy, one can also visit the Kolsai lakes. Found only a few kilometers from the border with Kyrgyzstan, the three Kolsai lakes are at altitudes of 1700, 2500 and 2800 meters respectively. One can reach the first one by car and from there, hiking to the second lake would take about two and a half hours. A final stretch of two hours would be needed to reach the final one. Horses for rent are also available on site during the high season. 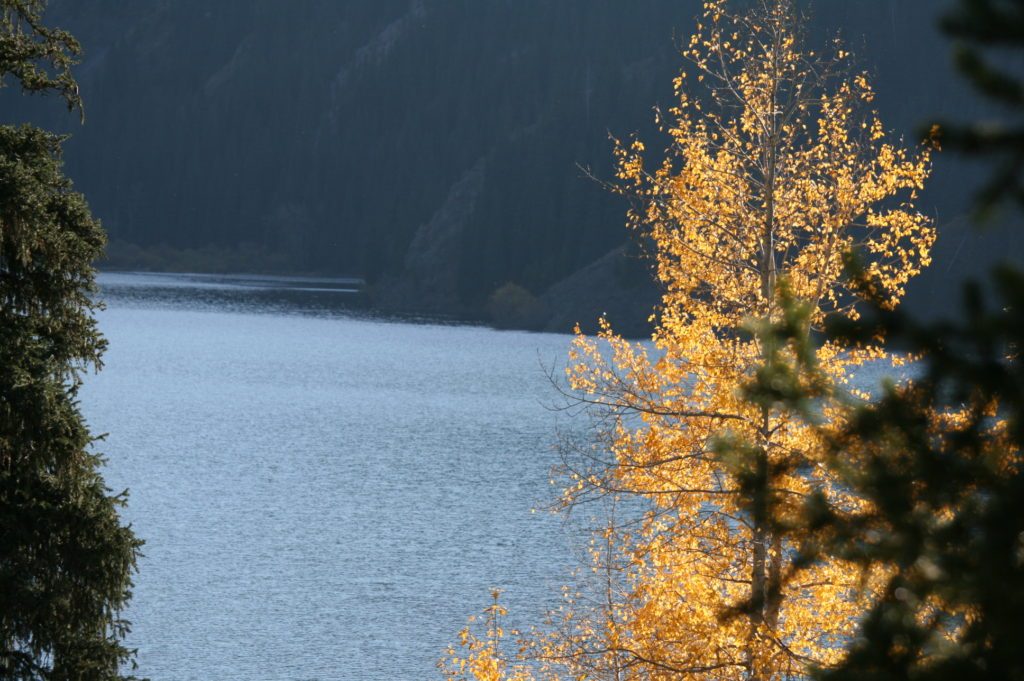 To reach Saty and the lakes, travelers can either rent a car in the city of Almaty or contact a tour operator. At this time, bus transport services are still being planned and developed. To Almaty I flew via Istanbul where I was able to see the brand new airport. “It’s a city within a city,” told me a flight attendant from Turkish Airlines when I asked her about it. The ceilings are high and stylized, and they look like the inner skeleton of a futuristic beast. During my couple of hours layover, I saw droves of people walking by, shopping for souvenirs, slurping soda, and in the maelstrom of so many passengers plenty had difficulty finding a seat. But despite its monumental size, the place was kept impeccable by the cleaning services team.

On the drive back to the city of Almaty I saw shepherds on horses looking after their sheep. On the face of the hills, they seemed like tiny fluffs of cotton pinned to the surface. Not far from them attentive dogs barked. They ran back and forth like short-tempered foremen. Far away into the distance I saw the silhouette of two solitary horses, and I wondered why they were so isolated from any other string of horses. After a moment I saw one of them raise its front legs and mount the other one. They had become a single shape. 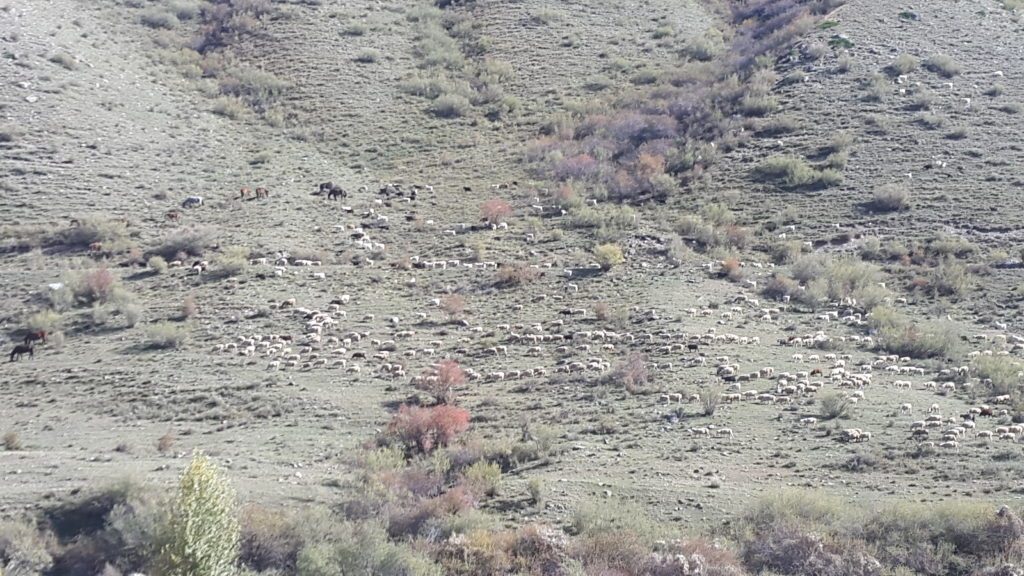 The largest city in the country, Almaty is nevertheless full of trees and green areas. Because Almaty lies at the foot of the mountains, several streams run through the city — the melted snow feeds the Bolshaya Almatinka, Malaya Almatinka and Esentai rivers. There is a legend stating that in the 19th century, men could only get married after having planted a dozen trees. Not for nothing is Almaty also referred to as the Garden City. 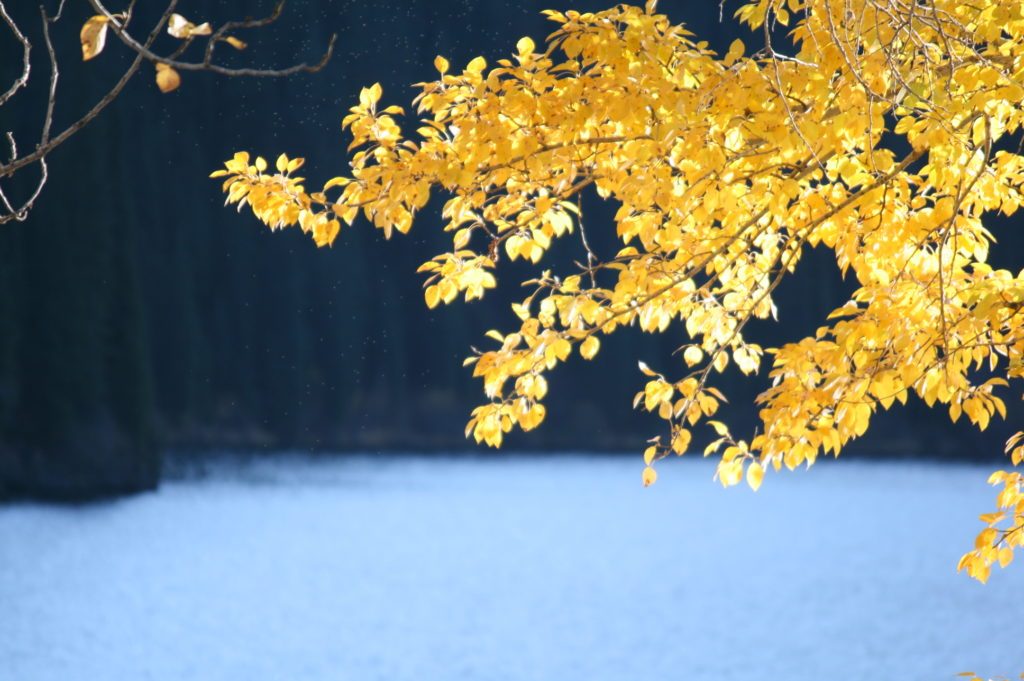 On a day trip from Almaty, I visited a Kazakh Ethno Village called The Huns where I was able to know more about the nomadic traditions. I saw horse riders, both men and women, demonstrate acrobatic tricks and traditions. For instance there is Kyz Kuu, or “Girl chasing”, a game where the horseman can either steal a kiss or get a whipping from the horsewoman. 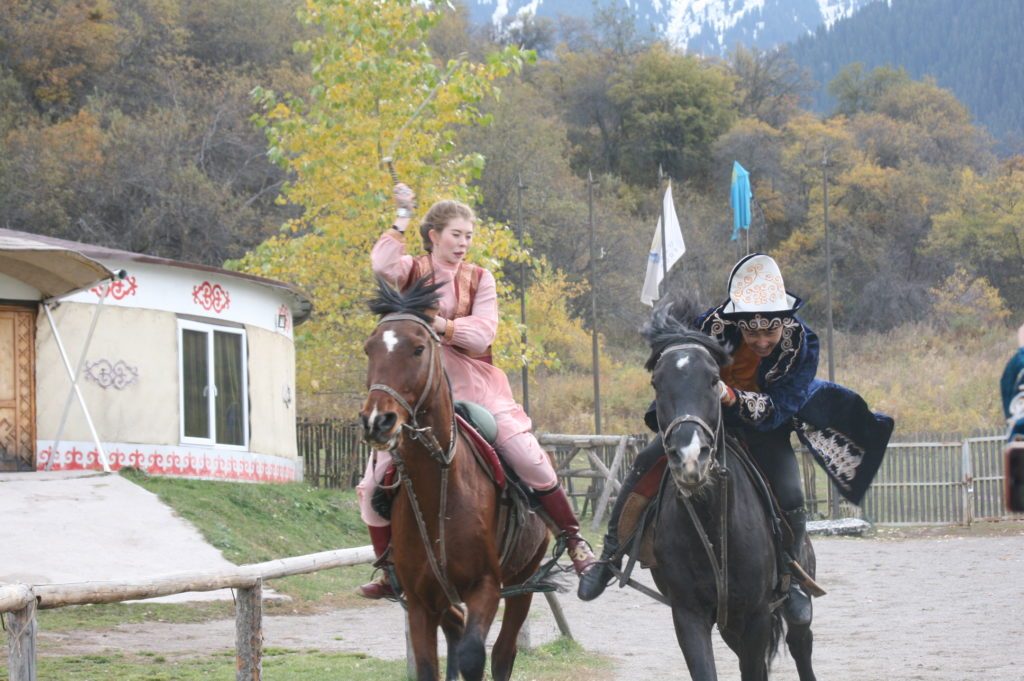 There are also simulated man to man fights while they ride their horses. Travelers can visit the Ethno Village for half a day or spend the night. There are yurtages (yurt + cottage) for those wanting additional comfort, and guests can choose to go on a horseback riding tour, relax in the steam room, follow masterclasses on “how to be a nomad”, or simply wander around and enjoy the sweet fragrance from the apple tree orchards. The juicy Aport, which is a mix of Russian and Kazakh varieties, grows in these fields.

Also on the outskirts of city, I visited a falconry where I learned about the Golden Eagle and why it is the national symbol of Kazakhstan. Nomadic tribes saw the need to protect their herds from the attacks of wolves and began taming and training eagles. Young eagles would be trained to hunt wolves by the neck or at least deter them from getting near the livestock. For centuries the tradition has passed on and thus the eagle symbolizes the nomadic culture of the country. 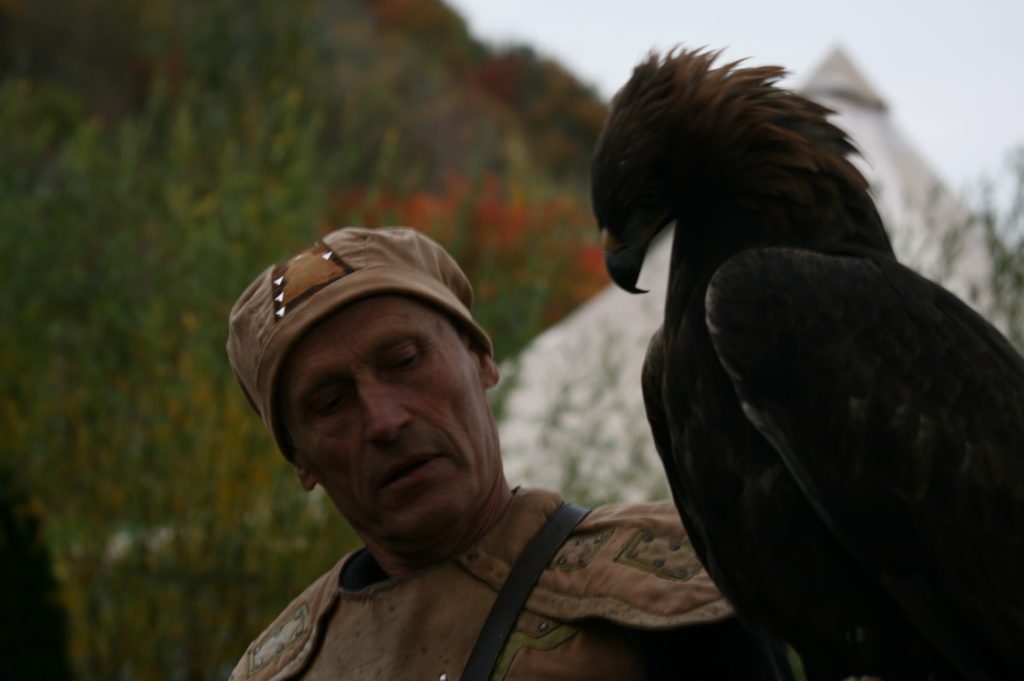 On the last day, I visited the Green Bazar (Zelionyj), which sits close to the intersection of Pushkin Street and Zhibek Zholy Avenue. Inside I tried dried apricots and figs and different nuts offered by chatty sellers, many of them Uzbek or Tajik, whose hands are always full of dried fruits for every passerby.

One can find pickled vegetables (carrot, peppers, cucumbers) as well as honey and many different kinds of dairy products, including the famous kumis or fermented horse milk. Before leaving I glanced one last time at the stands full of fresh fruits and vegetables all of them streaked by the mid-morning sunlight and I took with me the sounds, the smells, hoping to be back again in Almaty.